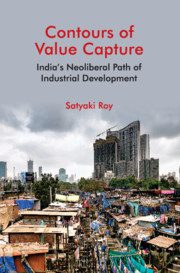 This book provides a critical perspective on contemporary debates on industrialisation in India. It aims to study the process of industrialisation at a conceptual level and articulate and contest the evolving debates and discourses. Instituting a market led growth in India ended in a trajectory that depends heavily on profit income led and corporate driven growth. However, the performances as well as fault lines assessed in terms of industrial growth are often restricted to a discourse on shifting relative importance of agriculture, industry and services and are largely pegged on the state versus private debate. It appears that the heterogeneous space of critical perspective tends to undermine the more fundamental questions that need to be raised in relation to the larger perspective of capitalist industrialisation in India. This book addresses these questions and provides insights into the complexities of the process and growth of industrialisation as it has played out in contemporary India.

Satyaki Roy is Associate Professor at the Institute for Studies in Industrial Development (ISID), New Delhi. He did his Masters from Jadavpur University and Ph.D. from the University of Calcutta. His initial research focuses on industrial clusters in India and the nature of spatial concentration of production in the context late industrialization. He has worked and published extensively on diverse issues related to labour and employment, structural change in India, emerging trends in the manufacturing sector; growth and human development in India and political economy of informality. He worked on various projects sponsored by the Indian Council for Social Science Research; Planning Commission, GOI; Department of Science and Technology, GOI and inter-country comparative studies sponsored by IDRC, Canada and IDE, Japan. His current areas of interest include global production network, its implications on the process of industrialization in developing countries and the emerging nature of global hegemony in the context of globalization.

4 – Financialisation in India: Emerging Trends in the Corporate Sector —  (55-80)