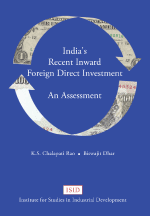 The Book in Brief

Over the past three decades, the Indian policy makers have been consistently emphasising the importance of attracting sizeable amounts of foreign direct investment (FDI). Governments, both at the Centre and in States, have been highlighting the rising levels of inflows and the FDI projects they have been able to attract. Given this central focus on FDI, it is reasonable to expect that the reported figures for FDI inflows would be a reliable barometer regarding the participation of foreign companies in India. However, the study India’s Recent Inward Foreign Direct Investment: An Assessment, published by the Institute for Studies in Industrial Development in July 2018, identifies many serious limitations of the data on FDI inflows.

The limitations make the data unsuitable for drawing straightforward conclusions, especially when commenting on the effectiveness of specific policies and programmes like Make in India (MII). Even the annual aggregate inflows cannot be relied upon to provide guidance regarding year-to-year changes because of omissions and commissions involving very large remittances. Nor do they truly reflect the extent of capacity creation in the economy by FDI. The distortions and limitations in official statistics show up prominently when the inflows are examined at the level of individual companies/industries.

The issues identified include (i) delayed reporting, (ii) duplicate reporting, (iii) non-reporting, (iv) incorrect entries, (v) notional inflows, (vi) inappropriate industrial classification, (vii) under representation of acquisitions, (viii) ’round-tripping’ by large global corporations and (ix) limited disclosure/analysis of the information obtained from the investees. These findings are mainly based on comparison of remittance-wise details reported in the Department of Industrial Policy and Promotion’s (DIPP) SIA Newsletter with investee companies’ filings with the Ministry of Corporate Affairs. The study describes each of the issues using multiple examples and case studies.

The study also discusses briefly the scope and implications of the changes made to the FDI policy in 2016 and analyses the reported inflows in the context of FDI policy changes and the thrust sectors of Make in India, with emphasis on the manufacturing sector. The reported total FDI inflows during 2014-15, 2015-16 and 2016-17 were $45.1 billion, $55.6 billion and $60.1 billion respectively. The corresponding equity inflows were $31.9 billion, $41.1 billion and $44.7 billion. Earlier, equity inflows came off the 2011-12 peak of $35.9 billion and fell to $22.9 billion in 2012-13. The inflows recovered partially to $25.3 billion in 2013-14. Thus, from a bare reading of the data, the recent experience appears to be a continuation of the recovery that started in 2013-14. The major changes in FDI policy effected at the two points, namely November 2015 and June 2016, might not have led to immediate strong response from foreign investors in the corresponding financial years. In fact, there was a steep fall in the early months of 2016.

At the broader level, the activities in respect of which FDI policy was relaxed accounted for 18.6 per cent of the total inflows during October 2014 to March 2017. The corresponding share for the years 2012 and 2013 was slightly higher at 20.8 per cent. Further, a regrouping of the inflows according to the 25 MII thrust sectors suggests that the MII sectors did not gain relatively in the post-MII period compared to two-year period 2012 and 2013. The figures suggest a slight decline in their share in the total inflows. Further, whichever way one looks at it, the share of manufacturing sector fell substantially. The sector’s share remained low and that too was concentrated heavily in automotive and allied industries, which in any case have been among the top recipients for many years.

Equally importantly, the contribution of newly incorporated companies is not significant in terms of their share in total inflows into companies which received at least $5 million. The number of new companies is also not large enough to indicate a strong and unambiguous response from the foreign investors. The few that were incorporated since October 2014 would have most likely come into being even if the MII did not happen. Most of the investments thus appear to be follow-up of the earlier envisaged investments.?? Further, there was also no drastic changes in the relative shares of different types of foreign investors in the new period.

However, in view of the various shortcomings and characteristics of the inflows, this traditional way of looking at the inflows does not tell the full story.

Glimpses of the Problems

Delayed and duplicate reporting are long-standing problems. The study identifies a number of such cases including those involving prominent companies and large amounts. The delays, however, cannot be entirely attributed to the investee companies as there were instances of considerable delays between reporting to the RBI/AD banks by the companies and taking them on record by the authorities. As a result, there remains significant backlog and remittances of one year are credited to later years, sometime after many years. An indication of the severity of the problem can be gauged by the fact that during 2016-17, when inflows were reported to have reached the record level, in case of large remittances each of at least $50 million, shares issued during the year accounted for only about half of the year’s total. The remaining half suffered from one issue or another. An implication of this state of affairs is that substantial amounts of inflows might have been received but are not reflected in the reported data.

The reported inflows can also be notional without any actual remittance of funds from abroad. These are generally associated with corporate restructuring. Such remittances turned out to be a major distorting factor in understanding sector-wise inflows. Notional inflows accounted for about 12 per cent of the large remittances during 2016-17. On their part, duplicate entries accounted for another 10 per cent. Two major instances of incorrect entries, namely $2,252.38 million and $2,836.43 million accounted for as much as 5.6 per cent 13 per cent of the equity inflows during 2015-16 and 2012-13 respectively.

Distortions Get Amplified at the Sectoral Level

Official data suggest that the inflows climbed to a higher peak during 2016-17. They also suggest that the share of manufacturing sector increased substantially during the year. However, in case of the electrical equipment industry, reportedly the top gainer in the manufacturing sector, nearly $1 billion could be traced to power generation instead of manufacture of electrical equipment. The corresponding amounts were actually remitted long back. Notional inflows and indirect acquisitions also played a significant role. As a result, out of the total $2,319 million inflows identified in the study, only about $385 million could actually have contributed to new capacity creation or rehabilitation of troubled companies belonging to the electrical equipment industry.

Due to large notional inflows and funds utilised in buying out shares from public shareholders, the corresponding amount in the case of cement industry was just $40 million out of the total $2,130 million of the reported inflows. One duplicate entry accounted for almost half of the inflows into the metallurgical industries during 2016-17! Notional inflows and duplicate entries accounted for bulk of the FDI into chemicals and chemical products. Together with the observed predominance of trading in the inflows into medical and surgical appliances, these observations raise serious doubts about the recovery of manufacturing sector in 2016-17. In case of the food processing industry, the study not only identifies considerable ambiguity but it also raises questions about the contribution that the reported FDI can make to the betterment of Indian farmers and the agricultural sector.

It is not the distortions alone which the Indian policymakers should be concerned about as the annual inflows are simultaneously being balanced to a significant extent by repatriations and disinvestments. The study finds that, on an average, as much as 34.8 per cent of the equity inflows went towards balancing the repatriations/disinvestments by the earlier investors during the past four years. This ratio increased fast as during 2010-11 to 2013-14 it was 29.4 per cent whereas it was only 4.5 per cent during 2006-07 to 2009-10.

While the increase in equity inflows during 2016-17 was $3,589 million, the increase on account of acquisition of existing shares was as much as $3,228 million. The increase in inflows through the approval route ($2,326 million) almost matched the fall of $2,077 million in inflows through the automatic route. Thus, acquisitions sustained the reported rise in inflows during 2016-17. Further, acquisitions happen in multiple forms, but the data are unable to capture this phenomenon fully. When the funds are deployed in downstream investments to take-over existing facilities or are invested in new companies which were incorporated for taking over existing facilities, the official data show them as cases of non-acquisition. While focusing on the quantum of inflows, this important dimension should not have been lost sight of.

Indian subsidiaries of foreign companies pay considerable amounts to their parent companies and other foreign affiliates in multiple forms, royalty payments being a favoured route. Questions were raised in the past about the desirability of subsidiaries of foreign companies making such payments. One can also question the necessity for such transactions and pricing of payments on other accounts, especially services. The official records cannot discount such outflows when reporting the inflows. In some cases such payments far outweigh the reported inflows.?? There is no way of discounting such avoidable payments when aggregating the inflows.

India Need to do a lot of Homework

FDI inflows are seen as a bellwether of the economy. ??In this context, the Indian policy makers, analysts and academic researchers not getting the right type of inputs can lead to serious misjudgements. It may also be mentioned that major revisions were made to the reported inflows for the year 2017-18 by the RBI as a result of which total equity inflows for the year fell by 5.5 per cent over the previous year in sharp contrast to an increase of 3.2 per cent reported initially. FDI is not an unmixed blessing as it can impact an economy both positively and negatively in the long run. In this context too, the inadequate attention paid to the reporting of FDI and to analysis of inflows and operations of FDI companies is a matter of serious concern.

The Discussion Paper on ‘Industrial Policy 2017’ circulated by the DIPP last year indeed expressed dissatisfaction about FDI not delivering the expected benefits and underlined the need to review India’s FDI policy. Interestingly, it also refers to the volume-centric approach of India towards FDI. This was probably inevitable as over the years FDI is increasingly being sought to alleviate the current account deficit, and correspondingly its role as the provider of development finance and technology has diminished. Thus conceived, not all the FDI would be associated with technology infusion, let alone infusion of advanced technology.

Keeping in view the concerns expressed by the Discussion Paper, the cold-shouldering of the recommendations of the advice given by the Expert Group headed by Dr. V. Krishnamurthy by the previous government, the less than adequate replies provided to questions in the Parliament, the global emphasis on generating useful operational data on foreign affiliates, the study underlines the need to put together lot more relevant data on FDI and the associated transactions.

Along with a review of the FDI policy, which was proposed by the official Discussion Paper, the reporting mechanism also should, therefore, be reviewed to make the data on inflows facilitate drawing of meaningful inferences and to provide guidance to policymakers and other national and international analysts. The RBI should regenerate the inflows/outflows data with enhanced information content, at least for the past five years. Further reporting of inflows could follow in that pattern. RBI, MCA, CSO, DIPP and DGCI&S should work in a coordinated manner to provide useful information on the operations of both foreign and domestic companies. Close association of scholars located in institutions and universities can enhance both the quantum and quality of analysis.