Webinar on The Survival of Outward Investments from India and China: Is there a North-South Divide?

Home » Webinar on The Survival of Outward Investments from India and China: Is there a North-South Divide?

Webinar on The Survival of Outward Investments from India and China: Is there a North-South Divide?

Prof Suma Athreye of Essex Business School, University of Essex presented her paper on “The Survival of Outward Investments from China and India: Is there a North-South Divide?” co-authored with Abubakr Saeed and Muhammad Saad Baloch of COMSATS, Pakistan on March 31, 2022.  This paper addressed the research question, what are the factors influencing the survival of outward investment in global North and South? It is argued that the likelihood of investments’ survival in the North and South differ on the basis of their firm-specific advantages (FSAs) in host countries. The authors analysed 747 foreign subsidiaries from China and India using the real options theory, covering a period from 2005 to 2018. Key explanatory variables used in the paper are absorptive capacity, labour productivity, and profitability. It is found that while profitability explains the survival of investments in North, all the three variables are significant in South. As subsidiaries of multinationals from emerging economies in South have better FSAs in these areas, probability of survival of their outward investments is higher in South. The presentation was followed by a discussion by a panel of experts consisting of Dr Andrea Goldstein, OECD, Paris; Dr Alka Chadha, IIM Sambalpur and D Y Patil University, Mumbai; and Dr Reji K Joseph, Associate Professor, ISID and open discussion. Prof Nagesh Kumar, Director, ISID moderated the webinar. 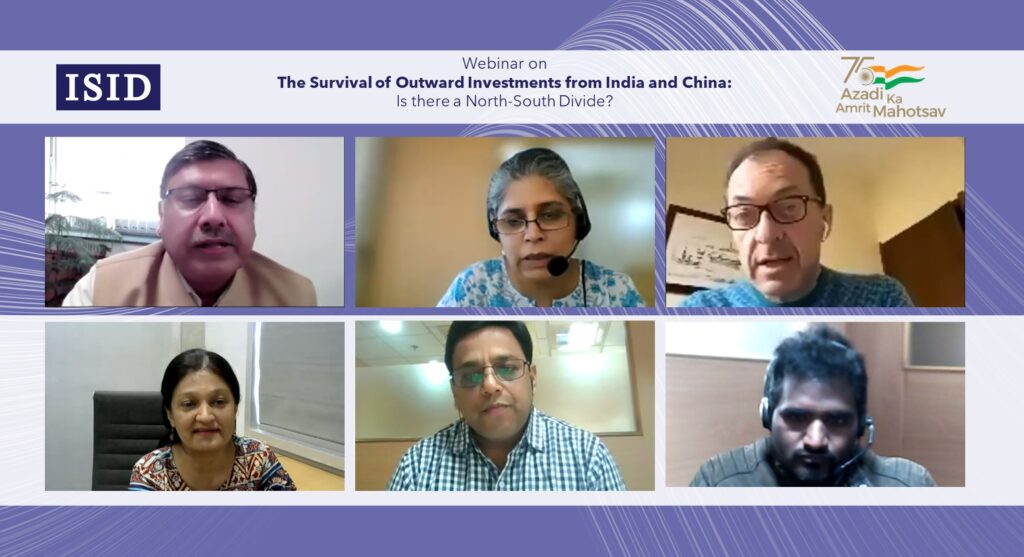 Multinationals from India and China have courted the economies of both the North and the South and they had different advantages in doing so. After more than two decades of successful internationalization, can the survival of Chinese and Indian investments reveal the factors that are associated with the success of EMNC investments in the North and the South? This is the main question we explore in this paper. We find that there is a North-South divide in the survival of Chinese and Indian outward investments. Investments in the North are subject to more intense competitive pressure due to the stronger technological and managerial abilities of domestic firms and survival is markedly weaker there. In Southern locations, where Chinese and Indian firms enjoy competitive advantages and industrial leadership in several areas, they also have better rates of survival. Apart from highlighting the role of relative (to host country firms) firm specific advantages in explaining survival in the North and South, we also find that a larger diaspora in Southern locations is associated with greater survival.