Home » Webinar on Reducing Import Dependence on APIs: An Analysis of Early Experience of the PLI Phase-I Scheme

ISID organised a webinar on “Reducing Import Dependence on APIs: An Analysis of Early Experience of the PLI Phase-I Scheme” on December 3, 2021 to present the findings of a study on the production-linked incentive (PLI) scheme phase-I in the pharmaceutical sector conducted by Dr Reji K Joseph and Dr Ramaa Arun Kumar. The outbreak of COVID-19 in Wuhan, China, and the lockdown that followed, had disrupted the supply of APIs and their intermediates and starting materials to India, leading to a temporary restriction of export of certain medicines from India. The PLI scheme that was announced subsequently aimed at attaining self-reliance in the production of 41 APIs/DIs/KSMs for which India is heavily dependent on China. However, the response of the industry to this scheme was not encouraging. In this context, this study was undertaken to capture the nature of import dependence and identify possible measures for the improvement of the scheme or to be incorporated into a strategy to achieve self-reliance in APIs. The analysis of import dependence, both in terms of share of imports from China and total imports in relation to production, shows that India is not heavily dependent on imports in some cases and such products should not have been covered by this scheme. The analysis of exports shows that India’s export of many of these products have increased over time and in some cases, China is a leading export destination. And, the RCA index is favourable to India, as compared to China, in most categories of APIs. This indicates the possibility of import of KSMs and DIs for the production of APIs. As cheaper import of KSMs and DIs help Indian producers to become competitive in APIs and formulations, they will have no incentive to invest in the production in India unless they see the possibility of producing at costs lower than import price. 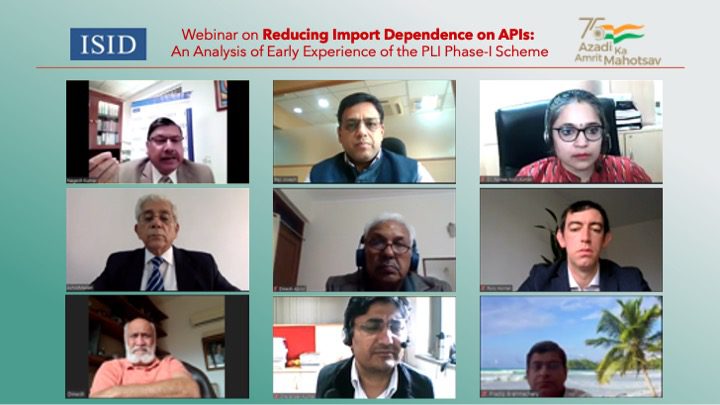 This study makes some specific suggestions, including incentivising operationalisation to the full capacity of existing plants, making technology a key aspect of the policy and adopting an integrated and holistic approach, to be incorporated into any strategy that aims to achieve self-reliance in APIs. Eminent panellists included Prof Dinesh Abrol, Mr Ashok Madan, and Dr Rory Horner, who provided many useful comments and observations on the findings of the study. The panel discussion was followed by a brief question and answer session. Prof Nagesh Kumar, Director, ISID, moderated the webinar. 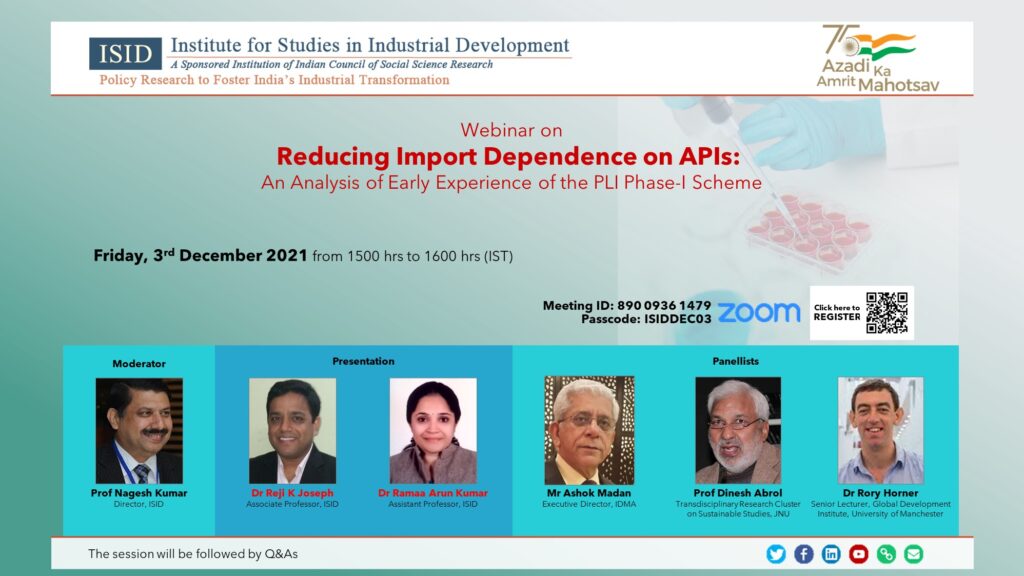