ISID Webinar on Inter-State Disparities in Industrialisation In India

Home » ISID Webinar on Inter-State Disparities in Industrialisation In India

ISID Webinar on Inter-State Disparities in Industrialisation In India

The Institute organized a webinar on “Inter-State Disparities in Industrialisation in India” on July 29, 2022. It included two presentations made by Dr. Shiladitya Chatterjee, Visiting Senior Fellow, ISID on the topic ‘India’s Unbalanced Industrial Development: Possible Explanations for Inter-State Variations’ and Dr. Sangeeta Ghosh, Assistant Professor, ISID on the topic ‘Examining Regional Disparities among States of India through Sectoral Compositions’. The presentations were followed by a rich discussion initiated by Prof. Sudipto Mundle, Chairman, Centre for Development Studies (CDS), and Prof. K V Ramaswamy, Indira Gandhi Institute of Development Research (IGIDR), Mumbai. The webinar was moderated by Prof. Nagesh Kumar, Director, ISID. Around 60 persons attended the webinar and more than 125 persons viewed it on YouTube till 30th September 2022.

The research study by Dr. Chatterjee attempts to discover the causes of inter-state variation in industrial development using the latest data from 2004-2019. It discusses India’s industrial structure and inter-state variations in industrial development and its likely causes. It highlights that despite manufacturing contributing over double the GVA compared to construction, in 2019-20 manufacturing employed only two-thirds of the number of workers (40 million compared to 61 million in construction). Further, employment in both these industry segments has seen a decline over the years according to CMIE data. Within the manufacturing sector, medium, small and micro enterprises (MSMEs) dominate. The MSMEs are by and large all micro-enterprises, with over 99 percent of the more than 63 million MSMEs falling in the microenterprise category. Employment in MSMEs constituted around 70 percent of total manufacturing employment in 2015-16. But MSMEs contributed a little over half of the total value added in manufacturing in that year, indicating first, that MSMEs provide the bulk of employment and also a major part of the output of manufacturing; and second that MSMEs have much lower labour productivity than large enterprises. The wide variation in industrial development, measured in terms of per capita manufacturing output, among Indian states exists. Gujarat’s per capita average manufacturing output in the period 2014-19 is twenty times that of Bihar. It appears likely that factors such as infrastructure including roads and power; availability of finance; education and human development; industrial environment; friendly ties between the Centre and states (double engine development in the current parlance); extent of urbanization, etc., would all affect industrial growth and development. Using both the simple correlations and the results of the multiple regressions, it finds that (i) development spending; (ii) power availability; (iii) education given by years of schooling as well as enrolment in higher education are critically relevant for industry in general as well as its subcomponents of manufacturing and construction. It also highlights the need for more research on this issue and the problem of large data gap for the MSME sector. It also suggests that the research institutions working on the development of the industrial sector may play a crucial role in it.

The research study by Dr. Ghosh examines the levels and movements of regional disparities across states of India through variations in per capita net state domestic products (PCNSDP) over a period of four decades. It finds that disparities have widened across states for the period under study, with shaper rises in the post-reforms period particularly from the 2000s onwards. It also finds that the relevance of the tertiary and secondary sectors has increased over time in explaining the disparities. The study does not find any evidence of convergence in the growth rates of states, even as most states have performed better in terms of their growth in per capita incomes in the post-reform period. However, it observes that the states that have seen lower growth rates in their PCNSDPs are also states whose economies have gained shares in their primary sectors and have lost shares in their secondary or tertiary sectors over the years vis-à-vis India. 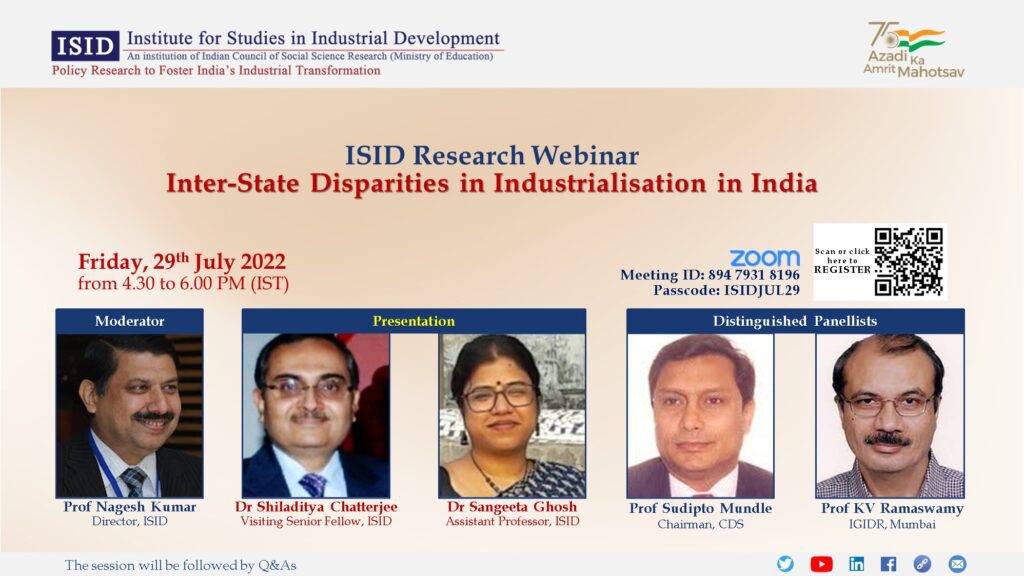