ISID and UNCTAD organised an online policy roundtable on Leveraging FDI Flows for Sustainable Recovery in the context of the World Investment Report 2021, on 29 June 2021 at 3.00 PM (IST). The Roundtable attracted good response with 239 participants in the live session. In addition, over 350 people have already watched the proceedings at the ISID’s Youtube channel.  The event was extensively covered in the national mainstream media like Hindustan Times, Economic Times, Mint, Hindu Business Line, and Business Today, among others. 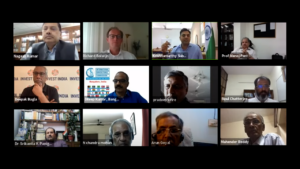 Mr. Richard Bolwijn, Director, Investment Research Branch, UNCTAD, Geneva, presented the key findings of the WIR 2021. He pointed out that India had emerged as a bright spot for FDI inflows in 2020. While global FDI flows declined by 35 percent, inflows to India increased by 27 percent, driven largely by mergers and acquisitions (M&As). Mr. Bolwijn also pointed out that policies that restrict FDI flows have also reached a record high in 2020 which includes the FDI screening measures that India had introduced last year.

Dr. Krishnamurthy Subrahmanian, Chief Economic Advisor, Government of India, delivered the keynote address. Dr. Subrahmanian credited India’s performance in attracting FDI to the slew of reforms that Govt. of India had introduced during the Covid-19 pandemic – labour reforms, agricultural reforms, change in the definition of Micro, Small and Medium Enterprises (MSMEs) and an enterprise policy focused on the private sector. He said that the manufacturing sector is the key sector for creating jobs and achieving social and economic inclusion and the government has introduced a number of measures in the past few years to reinvigorate this sector. He also said that MNCs should focus on creating jobs and helping MSMEs, who are their suppliers as well as customers, to grow and achieve economies of scale so as to create a symbiotic relationship where FDI can prosper.

The keynote address was followed by a discussion by two eminent panellists – Prof. Manoj Pant, Director, Indian Institute of Foreign Trade, New Delhi and Mr. Deepak Bagla, MD and CEO, Invest India. Prof. Pant said that FDI and technology are intimately related and this relationship may explain rising M&As: when technology obsolescence is fast, firms would overcome that by M&As rather than greenfield ventures. FDI and trade go hand in hand and they should not be seen in silos. Mr. Bagla pointed out some new trends emerging in the FDI inflows: investments are coming into new sectors including agri machinery and new states. He said that last year India received FDI from 83 countries and going into as many as 29 states. And there is a growing competition among the states in ease of doing business. He also said that M&As characterising FDI inflows to India is not a surprise; greenfield investments will show an upward trend as ease of doing business improves.

The presentations were followed by Q&As in which members of the audience interacted with the speakers.