Role of SEZs in India’s Industrialisation: Challenges and Opportunities

The importance of special economic zones (SEZs) as a tool of industrial policy has been realised across the world. There have been structural changes taking place in the evolution of SEZs at a conceptual level. Initially, these zones were located near ports as they were mainly in the nature of export processing zones. However, they have now evolved to take the form of various kinds of zones such as those engaged in transhipment activities, commercial or manufacturing hubs, hybrid zones inter-mix of SEZs, and general economic zones.

The SEZs help developing countries to overcome production bottlenecks or failures by offering attractive business and investment environment. By augmenting resource allocation and productivity, both being the drivers of economic growth, SEZs offer a tremendous opportunity for economies to extract maximum benefit in terms of rise in employment opportunities and export growth, among others. These benefits, however, may be limited if appropriate policies are not in order. The SEZs are delineated zones within an economy; however, if they remain delinked from economy, the zones may fail to move up the value chain. Factors like global competition for attracting FDI, economic risks arising from business cycles, and financial risks may undermine the advantages that the SEZs possess.

Unlike the successes of SEZs in countries like South Korea, Taipei China and People’s Republic of China, the experience of India in gaining from SEZ model was limited to a few zones. A mix of wrong policies pertaining to archaic land acquisition laws and lack of institutional preparedness led to widespread resistance within the people, especially rural land owners in the very beginning. These gave State and private players authority to acquire massive land masses with a very narrow window for response from land owners. As a result, as much as 50 percent of the land marked for the development of SEZs still underutilised in respect of 369 notified SEZs in 2017. However, there are SEZs which have succeeded in portraying the potential that can be achieved through the right mix of policies and institutional approach such as that of Sri City in Chittoor district, Andhra Pradesh.

To understand the perspectives of the various stakeholders (including policymakers, business associations, and academia) on the challenges that Indian SEZs have faced and the measures that can be or are being taken by the government and other stakeholders to fully exploit their potential, ISID organised an online session on the “Role of SEZs in India’s Industrialisation: Challenges, Opportunities and the Way Forward” in the India Land Development Conference, 2021 on November 24, 2021. The session was moderated by Prof Nagesh Kumar, who set the narrative of the session by stating the importance of SEZs to Indian economy and the challenges that await realisation of its full potential. A detailed and insightful presentation on this issue was given by Prof Aradhna Aggarwal, Copenhagen Business School. Distinguished panellists included Mr Srikanth Badiga, Vice President, Export Promotion Council for EOUs and SEZs; Mr Bipin Menon, Development Commissioner, Noida SEZ; Dr Malini Tantri, Assistant Professor, Institute for Social and Economic Change, Bengaluru; and, Dr Ramaa Arun Kumar, Assistant Professor, ISID. The session was convened by Dr Ramaa Arun Kumar. 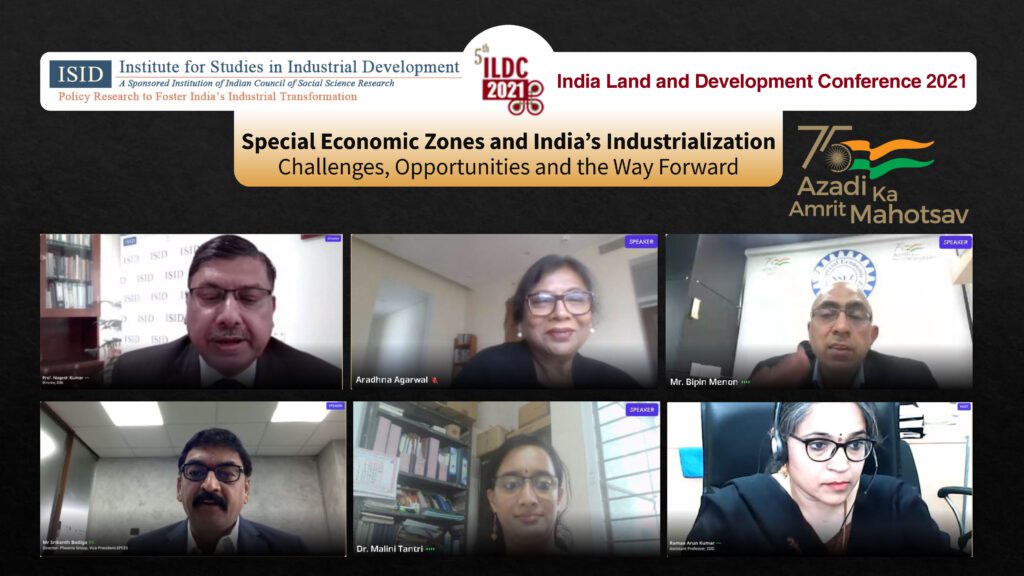 The Special Economic Zones (SEZs) are policy-led industrial agglomerations that have been established in different countries around the world. SEZs have contributed significantly to industrial and economic development in many countries by helping to attract export-oriented investments from global and domestic investors. The UNCTAD’s World Investment Report (2019) has documented the role that SEZs have played in attracting investments, leveraging the global value chains (GVCs), boosting exports, creating job opportunities, and promoting economic development of the host countries.

India’s experience with SEZs, however, has not been impressive in terms of fostering industrial development, job creation and economic growth. Although the number of SEZs notified in various states increased manifolds, since the implementation of the SEZ Act 2005, it did not translate into a corresponding growth of economic activities thus leaving over half of the land acquired under the SEZ Act remaining unutilized till 2014. Therefore, the implementation of the SEZ scheme in India needs to be analyzed and discussed to bring out the policy lessons for reforms. The issues that need to be discussed among stakeholders include those relating to land acquisition, regional disparities, labour, environmental factors, tax treatment, attractiveness to FDI, among others.

At this Special Session organized in the context of Azadi Ka Amrit Mahotsav, ISID seeks to provide a forum for debate among academics, policy makers and zone operators, and private sector representatives to analyze the challenges that Indian SEZs have faced and the measures that can be taken by the government and other stakeholders to fully exploit their potential. The key questions that would be addressed by the Session include:

To participate virtually please fill out the online registration form. 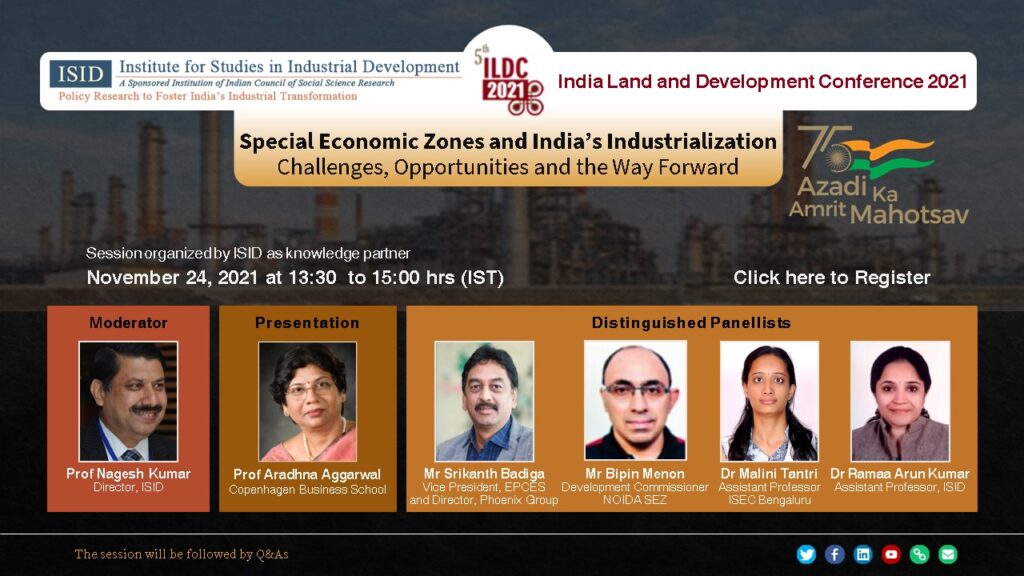