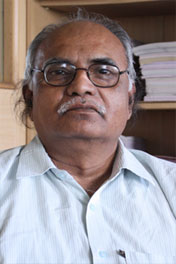 Professor K S Chalapati Rao (b. 1951), M.Sc., M.Phil., is a researcher having about three and half decades of experience in studying various aspects of India’s industrial policy and corporate sector. Having joined the Corporate Studies Group, the precursor to ISID, in 1980, he is virtually a product of the Institute.

Over the years, Prof. Rao has been associated with most of the studies undertaken at the CSG/ISID which encompassed stock markets, corporate governance, foreign investments, international trade, industrial regulations and SMEs. In the process, he has dealt with projects supported by national and international bodies such as the Union Ministry of Finance, Planning Commission, United Nations Centre on Transnational Corporations (UNCTC), Indo-Dutch Programme on Alternatives in Development (IDPAD), International Labour Organisation (ILO), etc. He has also been closely associated with planning and building of computer databases of the CSG/ISID.

For the past few years he has been focusing on issues relating to foreign direct investment (FDI). His research contributions have been in the form of project reports, chapters in books, articles and working papers.

Prof. Rao believes in digging deep to get to the bottom of things and pursuing different paths even if it means getting submerged or losing the way.