The establishment of ISID followed a course that is quite different from that of most of the fellow ICSSR institutes. The journey started in the late seventies as an assembly of a few committed and competent scholars and now has reached a stage where it can support long term research programme on diverse aspects relating to the country’s industrial development, after overcoming many hardships and uncertainties over a prolonged period of more than two and a half decades. The journey had been arduous for two main reasons. One: ISID did not have the additional active support of a state government or national and international organisations. Two: the institute chose to shun funding which can potentially influence public policy research.

The influence exercised by big business and large private corporations on the polity was a matter of intense debate in India both during the pre- and post-independence periods. Understandably, after the initial planning experience, the question arose as to how the increase in national income, emerging from planned development, was being distributed in the country. To examine this issue, Jawaharlal Nehru, as Chairman of the Planning Commission, set up an expert committee headed by Dr P.C. Mahalanobis, in 1960. Subsequently, the Monopolies Inquiry Commission (1965) looked into the existence and effect of concentration of economic power.

Soon after, the Industrial Licensing Policy Inquiry Committee (1969) was assigned the task of examining whether larger industrial houses benefited unduly from the operation of the Industrial Licensing System and the public financial institutions. The paucity of relevant data and information, however, made this task extremely difficult and time consuming. This experience underlined the need to have an agency which could provide appropriate data in readily usable form. 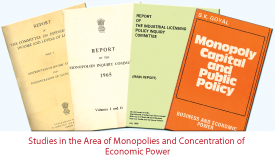 Professor S.K. Goyal, who was closely associated with this Committee as Honorary Economic Adviser, renewed his efforts at undertaking studies in the area of monopolies and concentration of economic power, at the Indian Institute of Public Administration. The study Monopoly Capital and Public Policy: Business and Economic Power (1979) further emphasised the absence of an agency to collect, analyse and interpret private corporate data and the sector’s influence on the society, economy and public policy. Professor V.K.R.V. Rao, a member of the Mahalanobis Committee, and who had drafted the chapter on Concentration of Economic Power for the Committee, in his Foreword to Professor Goyal’s study suggested the need for ???establishment of research centers on concentration of economic power in selected universities and institutions of higher research. Subsequently, Professor Goyal completed another major study Impact of Foreign Subsidiaries on India???s Balance of Payments (1979). 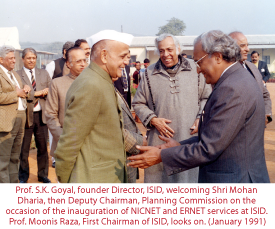 This was the background in which the Corporate Studies Group (CSG) at the Indian Institute of Public Administration emerged gradually. The five-year research programme, Regulatory Administration of the Corporate Sector in India, supported by the Indian Council of Social Science Research (ICSSR), based on the recommendations of the Committee comprising Professors V.K.R.V. Rao (Chairman), Raj Krishna and Amiya Kumar Bagchi, provided a major impetus for the CSG. The Committee in its recommendations underlined the necessity for having much more information and analysis than was available at that time ‘on the working of the corporate sector in India not only from the viewpoint of IDRA, MRTP and FERA but also from the point of view of productivity, efficiency and the cost structure’.

Realising the limitations of conventional data handling methods, the CSG took the lead to harness emerging computer technologies to facilitate better organisation of data and information for and faster, reliable and convenient access to it. Among the initial studies at the CSG was the Ownership and Control Structure of the Indian Press (1981) which was commissioned by the Second Press Commission. Functioning of the Industrial Licensing System (1983), Small Scale Sector and Big Business (1984) and Political Dimensions of the Multinational Corporations (1983) were the defining studies of the Group which received wide coverage in academics and in policymaking circles. 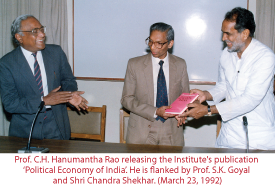 A Committee constituted by the ICSSR, under the chairmanship Prof. CH. Hanumantha Rao, to review the work done under the programme, recommended the continuation of the CSG into an autonomous Centre for Industrial Policy Research because

While industry and the organised sector in India have an important and growing place, there are no specialised centres to undertake research in this field on a continuing basis. This gap in the social sciences and industrial policy research needs to be bridged;

The other members of the Committee were Professor Y.K. Alagh, Professor Deepak Nayyar, Professor T.S. Papola and Shri T.L. Sankar.

Transformation of the CSG into ISID

As a follow up of the recommendations of the Committee, ISID was registered under the Societies Registration Act 1860, on October 7, 1986 to undertake, promote and co-ordinate research in the area of industrial development with special emphasis on the problems of India and its relationship with other countries of the world. ISID was brought under the grants-in-aid scheme of the ICSSR towards the end of 1987-88 thus paving the way for its autonomous development.

Even while functioning from temporary sheds on a shoestring budget and uncertain flow of funds for about one and a half decades, which also constrained it from attaining optimal faculty strength, the Institute continued its thrust on research and database building. From 1991 onwards the research agenda was widened gradually keeping in view the changed economic policy environment. Simultaneously, all out efforts were made to establish own permanent campus.

The operations of the Institute were shifted to the new campus in mid-2006. Immediately ISID started consolidating its programme as also further broadening and diversifying into activities like training and capacity building programmes. The period also marked the beginning of some financial stability and meaningful long term planning. The institute thus could renew the efforts to build core minimum faculty.

ISID is the culmination of the vision and tenacity of Professor S.K. Goyal. In realising this dream, many individuals from different walks of life and institutions contributed immensely to tide over difficult situations and to attain stability. Shri Chandra Shekhar, former Prime Minister of India had been a tower of strength providing support and guidance in multiple forms. Among the others who deserve a special mention are: Professor Moonis Raza, Shri Abid Hussain, Shri Madhu Dandavate, Shri Yashwant Sinha, Shri Markandey Singh, Shri T.N. Chaturvedi.

Indian Institute of Public Administration the ICSSR, Centre of Applied Politics, the Ministry of Finance and the Planning Commission in general and their senior functionaries in particular extended constructive support during various phases of ISID’s development.