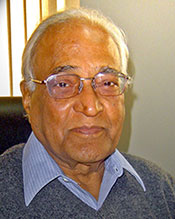 Professor S.K. Goyal, who was a close associate of Shri Chandra Shekhar, Former Prime Minister of India and founder of the Institute for Studies in Industrial Development (ISID), Delhi, passed away on February 4, 2021, due to cardiac arrest. Professor Goyal was a rare combination of academics actively involved in policymaking. Coming from a family of freedom fighters in Moga, Punjab, it came naturally to him to openly differ with the policymakers of the day whenever there was a point of disagreement. As an associate of Shri Chandra Shekhar, he worked closely with the Young Turks and provided them empirical-based policy inputs. The report on Commercial Banking in India, prepared by him with support from leading economists of the day namely, Prof. H.K. Manmohan Singh, Prof. V.B. Singh and Dr Sulekh C. Gupta provided the basis for the Nationalisation of fourteen private commercial banks, in 1969, by Mrs. Indira Gandhi.

As honorary Economic Adviser to the Industrial Licensing Policy Inquiry Committee (ILPIC, 1969) he had an opportunity to see closely how the statistical system of the day was not geared to meet the requirements of a planned and regulated economy. Having noticed the lack of suitable and reliable data on the industrial sector and due to the importance of the corporate sector for a modern industrial economy, he sowed the seeds for a specialised research centre on the industrial sector in the early ‘eighties with the support of the Indian Council of Social Science Research (ICSSR). He assembled a group of young scholars at the Indian Institute of Public Administration (IIPA) where he was working as a Professor of Economic Administration. Thus emerged the Corporate Studies Group (CSG). He inspired the scholars at the CSG and impressed upon them the need to undertake empirical-based research with clear policy connotation. Towards this end, he initiated them to build databases on the corporate sector, christened as Corporate Information System, a pioneering effort in those days.

His seminal works include Monopoly Capital and Public Policy and Impact of Foreign Subsidiaries on India’s Balance of Payments. He was instrumental in the CSG coming out with widely noted studies like the Functioning of the Industrial Licensing System and Small Scale Sector and Big Business. He not only institutionalised the research on the corporate sector in India but also made strenuous efforts to unravel the phenomenon of MNCs and the need to take a pragmatic rather than dogmatic view of their contributions, by host developing countries.

He endured many uncertainties and extreme difficulties in making his dream of creating a truly autonomous policy research institute, which is free from the influences of various interest groups, culminated in the ISID, the institutional form of the CSG, moving to its own campus in Vasant Kunj Institutional Area in New Delhi, in 2006. Professor Goyal chose to get the campus inaugurated by his long-time friend and a contemporary at the Delhi School of Economics, Dr. Manmohan Singh, then Prime Minister of India. Professor Goyal leaves behind a legacy, which demands his successors at the ISID to work for the social and economic development of India so as to enable the country to find its rightful place in the comity of nations.

Professor Goyal, born on October 13, 1933, is survived by his wife, son and daughter.